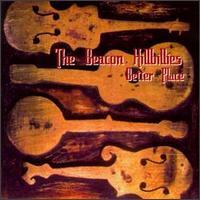 For those of you who like to hear traditional bluegrass instrumentation without the heavy drums and slick production that's prevalent on many »country« music albums today, the Beacon Hillbillies are just the ticket.
A four-man acoustic bluegrass band composed of John McGann (guitar, known from his work for Mary Gauthier or Warren Zevon), Jim Whitney (bass), Jimmy Ryan (mandolin, who also works with Chip Taylor & Carrie Rodriguez) and Lauck Benson (banjo), they play a refreshing kind of music that's so old it's new. And expert pickers they all are!

This album consists of 12 (including one hidden) tracks, four of which are instrumentals.
The band shows definite influences from Celtic music, as well as a talent for pacing the tunes right, from toe-tapping numbers where the banjo stands out, to dark, moody numbers such as »Midnight Sun.« The variety of song styles that reminds of The Seldom Scene or an acoustic incarnation of The Flying Burrito Brothers, doesn't allow one to become bored.