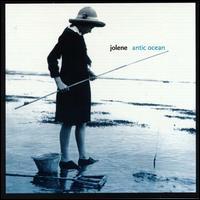 Jolene sound like a rootsy R.E.M. for much of their third album, Antic Ocean. They spice their Southern indie guitar rock with more folk influences than many other bands, and are more eclectic in their choice of arrangements and scope of instruments. Sure, it's kind of old hat to compare bands from this part of the country (Charlotte, NC) to R.E.M. But that reference point is there to hear, particularly in John Brooke's somber, pinched vocal style. It would have been much more of a cliché to hear such a release in 1987, actually, when R.E.M.-like bands were all over the map; in 2000 the field is not nearly as overpopulated. The music here is modest, reflective folk-rock that tends toward the moody side. What makes the album stand out is the variety to the sounds, with dulcimer, pedal steel, clavichord, Mellotron, accordion, creepy organ, harpsichord, and melodica augmenting the standard guitar-bass-drums lineup. When female backup vocals enter the mix (as on »Too Late Mr. Squiggly«), it adds a lot to the light and shade. Vicki Peterson and Susan Cowsill guest on the cover of Sandy Denny's »John the Gun.«