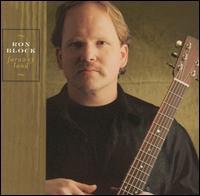 Ron Block, best known as the guitarist for Alison Krauss & Union Station, has recorded an album of original gospel tunes that is as musically strong as anything put out by his primary group (in no small part because all of them, including Krauss, make appearances on the album) but manages to give very clear testimony of his strong Christian faith without coming off as forced or sanctimonious. If you happen to share his convictions, you'll doubtless find comfort and affirmation in his words. If you don't, well, he's a terrific singer and picker, and he's surrounded by some of the very best in contemporary bluegrass. Along with his Union Station bandmates, he gets support from Chris Thile and Sara and Sean Watkins of Nickel Creek. It's a super star assembly of players behind a leader who really cares about what he's singing about. You can't ask for much more than that, and the music delivers everything the lineup promises.