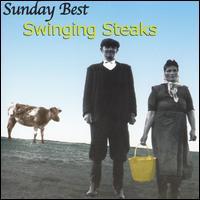 A four man band out of Boston,MA, Swinging Steaks are among the originators of the current roots rock/ alt.country movement. Fueled by dual singer/songwriters Jamie Walker and Tim Giovanniello, the group's material explores a rich diversity of musical Americana from full tilt rockers to mandolin-driven melodies and soulful ballads.
The Steaks have appeared with John Fogerty, Hank Williams,Jr., the Black Crowes, Poco, Los Lobos, Jimmy Dale Gilmore, Paul Westerberg, The Band, Jason and the Scorchers among others and have toured extensively on their own.
CREEM Magazine wrote: »The best country-rock out of Boston since Harvard student Gram Parsons put together his International Submarine Band«.
In 2002 the Swinging Steaks signed a deal with Blue Rose for Europe and went into the studio to record their best album since “Southside Of The Sky”. It's called „Sunday Best”, includes thirteen new originals (plus a hidden track) - an amazing blend of country rock, alt. country, No Depression or whatever you want to call this music. It's great anyway.