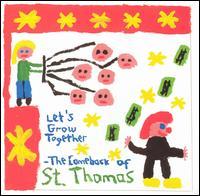 „The lack of sunlight seems to send Scandinavian artists utterly bonkers and Norwegian former postman St. Thomas - aka Thomas Hansen -proves to be no exception.
On one level „Let's Grow Together” reminds you of childlike simplicity of the Langley Schools Project but it also works on a more subtle, sophisticated level with some top tunes. St. Thomas blamed his mediocre last album on too much booze and dope but it seems laying off the hard stuff has worked for him
His plaintive voice has been compared to Neil Young, a claim that is utter nonsense, it's more early Elliott Smith who influenced the former professional footballer with a top Oslo team or the sublimely talented newcomer Sufjan Stevens.
Sunny Day sets the tone with St. Thomas' beautifully strummed acoustic guitar, swirling keyboards and some wonderfully primitive drumming driving along this pop gem.
It's hard to tell in his twisted world but Let's Grow Together alternates between twee pop and heartfelt ballads and „Like You Know” is the best of the lovelorn stuff.
Being sober has plunged Hansen headlong into the world of girls and on Let's Grow Together, he implores his woman to 'let's grow together in the colour blue' for some unfathomable reason.
I don't what they put in the water in Norway but St. T introduces a slow waltz in the aptly title Waltzing Round Insanity and he even tries his hand at disco in Dance to Disco which is an obviously semi-autobiographical tale of a holiday romance going astray
If all artists can recover their muse in this way then St Thomas is a walking advert for abstinence in the rock world. If you like your pop with a twist of insanity than this comeback album will send you drifting off along the melodic fjords.“ (BBC Manchester)