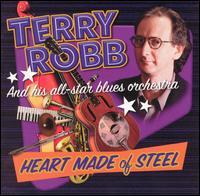 Pass Terry Robb on a Portland street, and you probably wouldn’t look twice at this soft-spoken, serious-minded man who easily blends in with the crowd. Catch him in the middle of a gig, however, and you’ll find a passionate, precise player whose ability to grind out hot shot licks makes for a commanding onstage presence. It’s like watching Clark Kent turn into Superman: the transition, while seemingly effortless, is astounding nonetheless.
Robb is one of those natural-born talents who makes guitar slinging look simple. No wonder – Robb first came under the spell of the instrument when he was just a kid; his uncle, a professional swing musician, tutored him in ragtime, blues, country, and jazz.
In the early 1980s, Robb struck up a friendship with legendary guitarist John Fahey, who asked him to produce and play on several of Fahey’s recordings. One of these, the eclectic Let Go, was cited by Rolling Stone as one of the top three releases of 1983 – right alongside Prince’s Purple Rain and Bruce Springsteen’s Born in the U.S.A. Throughout the decade, Robb and Fahey collaborated on a handful of albums, including Time God Casualty and Old Girlfriends and Other Horrible Memories.
In 1994, Robb signed a contract with the Burnside label, where he made his home for nearly a decade, releasing both acoustic (Heart Made of Steel and When I Play My Blues Guitar rank as two of his best), and stinging electric blues albums.
Along the way, Robb’s reputation grew: As he began cultivating an original style that combined traditional blues elements with more eccentric licks drawn from the jazz world – a la guitar greats Lonnie Johnson and Eddie Lang – he developed a following of his own, winning the Cascade Blues Association’s prestigious “Muddy Award” a record sixteen times and vaulting to their Hall of Fame in both electric and acoustic categories.

“What happens when you mix acoustic blues with a rousing jazz backup band?
Easy answer: You get an outstanding new album worthy of repeated listenings. That album is »Heart Made of Steel« (Burnside Records), the latest from guitarist Terry Robb. Infused by a solid swing attitude, Robb and his cohorts perform with an easy rhythm that will have listeners tapping toes in time with the beat.
Robb gets ample solo time on the album, playing with finesse and punch. His style mixes jazz, blues, country, swing and ragtime. A veteran worker in the halls and clubs of the Pacific Northwest, Robb can handle just about any style he wants to tackle. His voice, while not causing goosebumps, does the job as he works through a collection of songs that seem just right for the occasion.
Robb has his fans among fellow musicians. Noneother than ZZ Tops' Billy Gibbons said of Robb, »I sure love the way Terry plays that acoustic slide.«
The album's dozen tunes are mostly the work of Robb and several collaborators. The CD insert lists Albert Reda, bass and backup vocals, and Carlton Jackson, drums, as part of the Terry Robb Trio. Eleven other musicians make up Robbs »All-Star Blues Orchestra.«
Two guitar instrumentals display Robbs vast talents as a picker.“ (Bluesweek)