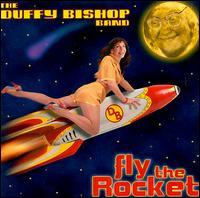 Blues vocalist Duffy Bishop (also singer in Big Brother & the Holding Company in a later incarnation) has a list of honors and awards as long as her microphone stand, including Best Female Vocalist from the Muddy Awards for five consecutive years, beginning in 1995. She took home the award again in 2001. She snagged a spot in the Cascade Blues Association's Hall of Fame in 1997. The Northwest Area Music Association dubbed her Best Female Vocalist in both 1989 and 1990, and followed up a year later by naming her Entertainer of the Year. In 1992, she again earned the title of Best Female Vocalist, this time from the Washington Blues Society. The organization repeated the recognition in 1999.
On her 1999 album, Duffy and her tight band play vintage '70s-style R&B with energy and conviction, a staunch mixture of urbanized city blues cross-pollinated with rock & roll, and just a dash of the rural blues that evolved into swing music. This is the horn-driven music prevalent in the small, smoky clubs of the South, music that was about getting dancers out onto the floor to strut their stuff, and as such is slower and more pushing to propel the body on the dance floor. The heartfelt quality of the songs comes shining through off the disc, which stems from the fact that the band, in one aggregation or another, wrote all but one of the songs. One song that truly leaps out is the tortured »Pain,« which was co-written by Duffy Bishop and Eddie Gahr, and sung with the conviction of one who has experienced the depths of the emotions they are singing about. The horn charts here stand as a perfect complement to the pain echoed in the voice. Some of the songs are also written with a playful sense of humor; listen to »Fly the Rocket,« and the images drawn up fit perfectly with the cover art's sense of kitsch. The backup singing by Duffy Bishop is fuller and richer than her lead vocals. Her singing as lead vocalist at times is a bit thin, not enough fullness of voice to match the intensity of the song. Yet she does get this richness on backup vocals, and on a few of the numbers more toward the end of this disc. She even does a great smoky torch number at the end called »Blue Lullaby,« that is a great faux ending to the disc (there is an uncredited, moody psychedelic song that provides the real one). This 14-song, 73-minute disc is good introduction to this band's work. They apply an energy, tightness and focus to their music that serves them well.