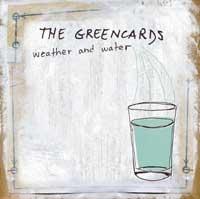 When two of the most towering figures in popular music invite you out on tour, you must be doing something right. What The Greencards are doing right is making great music. That's why Bob Dylan and Willie Nelson asked the band to perform on their national tour starting May 25. The Greencards will tour with the iconic legends through July 11.

There'll be little rest for one of the hardest working bands in acoustic music, which is how they like it. After the Dylan/Nelson tour, The Greencards will makes stops in Texas, Colorado and Idaho before meeting up with Australian singer/songwriter Kasey Chambers. They join the chanteuse from Down Under beginning Aug. 5 and will tour with her throughout the fall.

One listen to the band's upcoming sophomore album, Weather & Water, and it's easy to hear why these musical giants are turning to The Greencards for tour support. The disc, which releases June 28 on Dualtone, is a modern acoustic masterpiece. The band produced the album and called on in-demand engineer Gary Paczosa (Alison Krauss, Nickel Creek, Dolly Parton) to engineer it. They also wrote nearly every song on it. When they brought in outside material, it was from top-notch writers like MCA recording star Jedd Hughes, who wrote the title track, and Patty Griffin, who contributed »What You Are,« a tenderly beautiful ballad.