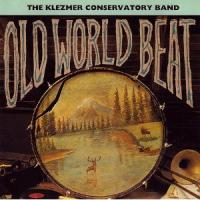 The Klezmer Conservatory Band was formed at the New England Conservatory of Music in the early eighties, really just for a jam session of Jewish music. When they got requests to play at weddings and b'nai mitzvot, they realized they had something special and organized as a band. Along with the Klezmatics, KCB was one of the leaders of the modern klezmer revival. Klezmer Conservatory Band is more traditional, while the Klezmatics are a bit edgier. Many other groups have followed, and the roots are interconnected between many of the groups.