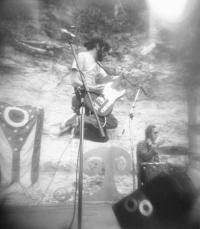 In the beginning there was a four track and two enthusiastic Daytonians - Dave Doughman and Don Thrasher. The time was 1995 and the duo convened wherever they could find borrowed gear and a power source. Within months the pair had racked up a serious bar tab, killed a brain cell or two and still managed to amass a healthy back log of songs, many of which still remain in the vaults.

By late summer '95, the duo was still working without a name but that was about to change. Doughman compiled an LPs worth of material, borrowed a name from a fake band flyer he had made and began pumping out DIY cassette copies of the 12-song debut by Swearing at Motorists. The tape caught the ears of Matt and Jon Fisher, who were starting an indie label in the Staten Island home of their parents. The brothers selected two S@M songs, »King of Baltimore« and »Sympathy for Thinkers,« for their flagship release, As Seen On TV. The CD compilation also featured the Thomas Jefferson Slave Apartments, Jason Morphew, Azalia Snail, the Caroline Know and more. Before, the compilation was even out, Spare Me was making plans for its second release, Tuesday's Pretzel Night, a 10-song 7» EP from Swearing at Motorists. This release followed the same framework as the self-titled debut: magical pop songs, wreathed in melancholy and captured in miniature.

The 7« was released in 1996, and to coincide with the event, Dayton's dynamic duo played its first show, a record release party at Walnut Hills. Appropriately enough, it was a Tuesday night. Pretzels were free and Swearing at Motorists introduced the hometown crowd to a fresh brand of Ohio rock. Dig the new breed, indeed!

Live, the fleshed out 4-track recordings became powerful pop anthems stripped of all pretense and delivered with a rough and tumble energy all but forgotten in modern rock. Doughman working the stage like a spastic mix of Prince and Jon Spencer. Now a full-fledged band, the duo began to play out with a vengeance. The flurry of activity sparked a continuous string of songs that the duo were now recording exclusively in Doughman's Main Street home, dubbed the Rock n' Roll Bed & Breakfast. In 1997, Spare Me issued the 12" vinyl EP, The Fear of Low Flying Clouds, a collection of yearning pop songs that forged a common ground between Elvis Costello, the Buffalo Springfield, the Minutemen, Nick Drake and the Cars.

Swearing at Motorists continued to release songs on compilations and increased its exposure by touring with Shove, from Davis, California, in the summer of '97, and Spoon, from Austin, Texas, in the summer of '98. Frustrated with Spare Me's lack of promotion and limited distribution, Doughman and Thrasher began fielding other offers.

In 1999, Swearing at Motorists signed to Bloomington-based indie Secretly Canadian, home to Songs: Ohia, Marmoset, June Panic, Panoply Academy and other fine bands. In the summer of '99, the duo broke tradition and entered an actual studio to record More Songs From the Mellow Struggle, its Secretly Canadian debut. The tracks were recorded by Phil Mahafey at Cyberteknic Studio in Dayton. Mahafey has worked with modern acts such as Kim Deal's Amps, Brainiac, the Mulchmen and Mink as well bluegrass stars Ralph Stanley and Red Allen, country rockers Dixie Peach and new wave songwriter Dale Walton.

Late 2000 Don Thrasher left the band and Joseph Siwinski (of Philadelphia-based The Trouble With Sweeney) promptly took over as drummer.