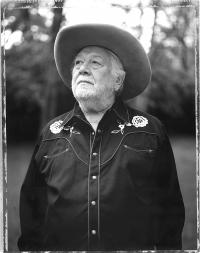 “I’ve got a bunch of people who say I’m a genius,” Cowboy Jack Clement once said. “That don’t make me a genius. But you’ve got to be pretty smart to get all them people to say that on cue.”

Any rational discussion of Cowboy Jack – and the events leading up to this, his first album in over 25 years and only his second as a solo artist – must start with the requisite reading of one highly abridged history: Born in Memphis in 1931, by his twenties had formed bluegrass and Hawaiian bands, recorded rockabilly pioneer Billy Lee Riley, and shared stages with a teenaged Elvis. Hired by Sam Phillips in 1956 as right-hand man at Sun Records, where he produced groundbreaking rock & roll tracks by Charlie Rich, Roy Orbison, Jerry Lee Lewis – including Whole Lotta Shakin’ Goin’ On – and Johnny Cash. Moved to Nashville in 1959 as Chet Atkins’ assistant at RCA and soon became one of the first independent producers to work for a major label. In 1965, he broke country’s color barrier when he discovered Charley Pride and went on to produce Pride’s first 20 albums and biggest hits. Along the way, Clement would also produce landmark records by Cash, Sheb Wooley, John Hartford, Doc Watson, Townes Van Zandt, Don Williams, Waylon Jennings, Louis Armstrong and polka king Frankie Yankovic. In 1988, U2 asked him to produce tracks for their RATTLE AND HUM album. Jack had never heard of the band but enjoyed the sessions nonetheless. A member of the Nashville Songwriters Hall Of Fame, his songs have been recorded by Hank Snow, John Prine, Cliff Richard, Ray Charles, Gram Parsons, Tom Jones, George Jones, Porter & Dolly, Gerry & The Pacemakers, Garth Brooks, Johnny Cash, Charley Pride, Jim Reeves and Foghat. He formed publishing companies, launched his own label, built his own studios, produced a cult horror film, has mentored many of Nashville’s top writers and producers, and is currently ‘Executive Tour Guide and Scenic Consultant’ for The Country Music Hall Of Fame And Museum.

There’s plenty more, but you get the picture: Cowboy Jack Clement is arguably the greatest combination of musician, producer, songwriter, publisher, performer, engineer, executive, entrepreneur, cockeyed visionary and certified raconteur in modern music history. Jack sees it in far simpler terms. “I’m a professional fool,” he explains. “I’ve got a vast amount of ignorance at your disposal, especially the musical kind. But sometimes it all works.”

GUESS THINGS HAPPEN THAT WAY is an album literally 25 years in the making, a goodtime testament to the one-of-a-kind world of Cowboy Jack. It’s also a project that Clement has been tinkering with until the last possible second, remixing a vocal here, adding a kazoo there, and juggling the entire sequence to ultimately tell a story the way only he can. “I’m an experimenter.” Jack says of the disc’s unconventional evolution. “Some of these tracks I first laid down as long as 15 years ago. I hear stuff in my head, then try to get it out. Sometimes I know what I want, and sometimes it turns out different. I wanted to make a record with a collection of different stories that when you hear it, you would imagine a movie. I basically set out to put on an Ear Show.”

The album was recorded at Nashville’s notorious Cowboy Arms Hotel and Recording Spa – the wired-for-sound house that has been Clement’s home and headquarters for 30 years – and features ‘Cowboy’s Ragtime Band’, a superb group of cronies, cohorts and ace players, many of whom Jack has known since the early ‘70s. Together, they color in Jack’s outside-the-lines arrangements where accordions and ukulele can live and swing alongside steel guitar and horns. For Clement, it’s an ongoing defiance of genre expectations that has been his signature even before he put the mariachi horns on Johnny Cash’s Ring Of Fire. “I’ve never paid attention to trends,” Jack says. “I just think about what the song needs and how it ought to be done. Most every successful record I’ve ever produced was successful because it didn’t sound like anything else at the time.”

The album’s songs themselves are a combination of past Clement classics, new – and new-old – Jack tunes, and songs he loves by friends he’s known. And as Jack promises, every song has its own story to tell. “I’ve been singing No Expectations for years,” Jack says of the Jagger/Richards opener. “In fact, I first sang it to Johnny Cash who went and recorded it. But I didn’t hear the Rolling Stones version until recently. With It’ll Be Me, I’ve been trying to sing it ever since Jerry Lee Lewis cut it in 1957. He wouldn’t do it the way I wanted him to. Every Place I’ve Ever Been was co-written by me and Zell Miller, who at the time was Governor of Georgia.“ Dreaming My Dreams first appeared as the title track of the 1975 Waylon Jennings album co-produced by Jennings and Jack that remains the defining project of the Outlaw Movement. “My relationship with Waylon started before he ever came to Nashville,” remembers Clement. “Bobby Bare was playing a tape of him around town, and I really liked it. Waylon showed up six months later, and I first met him at a Johnny Cash session. He thought I was lookin’ at him funny.’ He went over to Johnny and said, ‘If that guy looks at me that way again, I’m gonna hit him.’ We did have our fights over the years, but to me he was always King Of The Cowboys.” As for Drinking Carrot Juice, Jack describes it as “a love song about carrots” and will gladly explain how it precipitated the second divorce from his first wife.

For Ballad Of A Teenage Queen and Guess Things Happen That Way, Jack turned to Cash, the longtime friend who had made both songs into the longest-charting #1 hits of both their careers. ““When I wrote Teenage Queen in 1957, I had in mind a kind of calypso/rumba but Johnny recorded it a whole different way,” Jack says. “So when I cut this version, I sang it the way I wrote it. And I finally got Johnny to sing it the way I always wanted it.” Their last session together, for Guess Things Happen That Way, took place a few months before Cash’s death. “We set up a microphone in my office, because he couldn’t get up the stairs. He sat down and sang it until he and I thought it was how it ought to be. I remember that he really enjoyed himself.” It was a fitting finale to a remarkable relationship that had lasted nearly 50 years. “He was a wonderful, wonderful man,” Jack says. “I think about him every day.”

Ultimately, what shines through every track of GUESS THINGS HAPPEN THAT WAY is the sound of a 73-year-old legend still full of surprises, doing what he enjoys most and does best. “What else am I gonna do?” Jack asks. “I’ve been a music bum all of my adult life. Making music has always been my hobby and it still is. I’ve always said that we’re all in the fun business, and if we’re not having fun then we’re not doing our job.” Once again – and like never before – Jack Clement has done the job like nobody else. But is there a moral to this musical story, a final message left dancing in the air of The Cowboy Jack Ear Show?