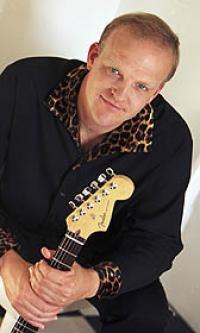 At a time when most emerging blues-rock guitar players tend to be slender young men born after the Carter Presidency, there is something very satisfying about discovering a fully grown musician with prodigious talent who has no need for acne treatments. Not to knock the wunderkind, but there is more to being a great musician than just fast fingers. It's about head and heart too.

Consider guitarist Albert Cummings who, when he's not been busy constructing award-winning custom houses, has built a following through the electrifying shows he performs in the Eastern U.S. and via a fine first solo album, From the Heart, featuring the 36-year-old guitarist backed by Stevie Ray Vaughan's full Double Trouble lineup of Chris Layton, Tommy Shannon and Reese Winans.

Cummings' newest release True To Yourself, featuring 10 original tracks, could be a proper description of the man as well. Cummings, who hails from a small town in Western Mass., is supported on this new recording by some of the most respected names in blues, including his Double Trouble friend Tommy Shannon on bass as well as Austin session kingpins Riley Osborne on keyboards and B. E. Frosty Smith on drums. Top producer Jim Gaines (Santana, Luther Allison, Stevie Ray Vaughan, Albert Collins, etc.) was behind the recording console.

Why such a delayed start for a man who ends the disc with a song about »being true to yourself and following your soul?« Simple. Family tradition. He is the fourth Albert in his family to go into the New England construction trade. »We've been building houses for more than a hundred years around here. I never thought there could be any other career for me,« he admits, despite having been obsessed with music since his childhood.

At an early age he learned his first three chords, but switched to five-string banjo when he was 12. »I'd go to bluegrass festivals and watch the main stage acts. The fun though was at night when I could wander through the campgrounds, and there'd be a jam session every 100 feet - musicians around campfires playing. It was fascinating to sit and learn from people and start cutting my teeth in music.« While in high school he won several talent contests and made semi-regular appearances on Boston's ABC Network affiliate.

The transition from banjo to guitar began when he was 16 or 17 and a brother-in-law gave him tapes of Stevie Ray Vaughan during the Texas Flood period. »I remember comparing the guitar style to my father's playing, and I'd think there's no way ... there has to be two guitarists playing - can't be one man. It's got to be some freak thing. How could anybody play guitar like that? I used to listen to these tapes over and over,« he says.

Not long afterward, while in college, he saw two tour buses outside Boston's Orpheum Theater, one of them with a Gibson Les Paul and a Fender Stratocaster crossed on the side. »It was Stevie Ray. I bought a ticket for that night and watched him do amazing things - stand on his guitar, throw it up in the air - I sat there in awe the whole time and walked out of there thinking, I really want to play guitar!«

But there was the matter of learning his builder's trade. Over the next few years, when others his age were starting their first bands, he went to school, studied his craft, joined the Army National Guard, met his future wife and started his business. »It wasn't until I was 27 that I finally got up with a band to play a Chuck Berry song at a friend's wedding. «I guess I got bit,» he says. Soon he and a friend were wood-shedding, playing «Stormy Monday» until they were sick of it.

Fast-forward a few years, through a stint in a band called Swamp Yankee, and Cummings found himself performing with the same rhythm section that had backed Vaughan at the Orpheum. He was sharing a bill with Double Trouble at Rensselaer Polytechnic Institute (RPI to the locals) in Troy, New York, about an hour west from Cummings' home. Out of that life-altering night at the RPI field house came an offer from Double Trouble to produce and play on Cumming's From the Heart, the title based on the career advice Shannon suspects SRV might have offered Cummings had they ever talked. «Tommy, especially, has become a big brother to me,» Cummings says.

Shannon, besides playing bass on the new True to Yourself, also serves as musical director. «Tommy knows me and knows what I need - how to get me where I want to go because I don't know all the ins and outs of the studio.»

The band cut basic tracks at Wire Recording Studio in Austin, Texas, and then Cummings and producer Gaines finished the project at the legendary Ardent Studios in Memphis. «I've always had it in my head that I wanted to have Jim Gaines produce an album for me. In the past, if I'd hear a powerful album, sure enough it'd be a Jim Gaines production. He makes you relax while at the same time keeps you working your tail off.»

The song «Blues Makes Me Feel So Good» stems from people who have asked him why he plays a type of music they associate with the life's disappointments. «Obviously they don't get the blues. It's real, and there's something about it that affects me deeply. I suppose it's the human connection. This song came out of a show where I just sang that line spontaneously, and the audience sang it back to me.» For Cummings, it was a special moment , realizing how music, despite the hardships of life, can make you feel good.

Even his slow-blues-in-a-minor-chord, love-gone-wrong song «Lonely Bed» has that human connection, despite its apparent story of infidelity. Albert states «The song is open enough that it doesn't have to be a sexual thing. There are lots of levels to heartbreak.»

«Sleep» is also a night-time song - a lullaby. Cummings has two sons, and he puts them to bed when he's not on the road. «One night I was sitting there with a guitar and thinking about putting them to sleep when the song came flying out of me. It's just a little pep talk to your son or daughter when you're putting them to bed. Or it could be to any loved one really.»

The closing song, «Follow Your Soul,» on True to Yourself is obviously very personal, but Cummings says its composition came simply. «When I went to Austin to record, I already had the lyrics, but in a different format with a very different feel. But when I started doing it with the guys, I just started playing something new, and the song was born right there.. As Tommy [Shannon] likes to say, 'You need to find the pulse of a song for it to happen.' And I think that's true for everything - be true to yourself and follow your soul. How can you be happy in life otherwise?»

Fans have asked Cummings why he held off on his own career until now rather than start when he was younger. His answer is that he couldn't have. «I wasn't me yet. Nothing had happened to me. It's all part of who I am today when I have a guitar in my hands. Everything I write comes out of experience. When you've lived something or experienced something, you can write down what you're thinking and put it into a song.»

And what he's doing with that guitar and these songs now is what matters. In the short time since he shifted gears from a builder who played part-time to a full-on musician, he's come a long way. Besides the personal bond with Double Trouble, Albert has won the respect of a number of other musicians. As of the mid-2004, he's shared bills with Buddy Guy, Charlie Musselwhite, John Hammond, Susan Tedeschi, Tommy Castro, Chris Duarte, Bernard Allison, the Neville Brothers, the Fabulous Thunderbirds, Sheryl Crow, Duke Robillard and - and this is a big and - he's opened for B.B. King 19 times.

When he was in Memphis finishing True to Yourself, Cummings caught one of B.B.'s shows at the namesake club on Beale Street. «B.B. saw me out in the crowd and called me up and introduced me to his audience, telling them that he considers me a wonderful guitarist. It was like being on Cloud Nine. I'm so proud to have B.B. King call me his friend. It's the thrill of my life."

As a wise man once observed, all good things do come with time.