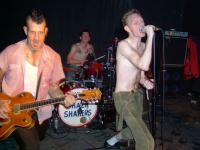 Th' Legendary Shack*Shakers: Southern by the Grace of Goth!

Front man and blues-harpist »Colonel« J.D. Wilkes began yelpin' the blues thru a ham radio mike at his boyhood home in the Atomic City of Paducah, Kentucky...not far from where future band mate and double-bassist Mark Robertson was cutting his teeth on punk rock.

Years later, when the two met, they found their separate styles and interests meshed well together. With the recent addition of David Lee, South Carolina's preeminent rock n' roll bad-ass and »Illustrated Man« extraordinaire, Th' Legendary Shack*Shakers have now become the best Southern Gothic amusement you can get for your hard-earned money.

Melding the rural, agri-dustrial rhythms of Appalachian hoedowns, the intensity of gut-bucket blues, and even the madcap oompah of Polka, the band has created a monstrous abomination (Delta Punk?). And it is this sound that keeps them in high demand from Europe to New York to the West Coast & all points in between.

Along the way, they lug with them an eye-popping display of authentic, sideshow humbuggery; thus lending even more color to their peculiar pageant of Vaudevillian exuberance. As a result, the band routinely tops the lists of Music City's alt-weekly picks and has been named one of the Best Live Shows year after year. Colonel J.D. was voted Nashville's »Best Front Man« by the Nashville SCENE, and has been called »the last great rock n' roll front man« by the Dead Kennedys'‚ Jello Biafra.

Their new record Believe (their first full-length release on Yep Roc records) runs the musical gamut, from the creaky-croaky murder balladry of »County of Graves« to the cheap-suit, town-drunk swagger of »Piss and Vinegar«. It's proof positive the band deserves the apt description given to them by Jason »and the Scorchers« Ringenberg, which is:

»The best American music being made today.«

But don't take his word for it, find out for yourself by picking up a copy for your home or car stereo today!